A Magical Four Days on the Route des Vins in Alsace, France

The Route des Vins is a 170 km stretch of bucolic rolling hills, vineyards and fairytale villages that meanders north to south in the Alsace region of eastern France. It generally begins at Strasbourg in the north and extends to Thann, below Colmar in the south. The best time to visit is during the summer and fall. We visited in October when the vines were rich golden and red.

You can reach the area by train; both Strasbourg in the north and Colmar in the south have train service, and Strasbourg has an international airport, but to really see and appreciate the villages and the beautiful countryside surrounding them, you'll need a car. Bikes are readily available to rent and would also be a great way to see the area.

Katie met me in Paris and we took the train to Strasbourg. It's an easy 2 1/2 hour ride on the TGV from the Gare de l'Est. We spent about 24 hours in Strasbourg before renting our car and heading south.

A city of several hundred thousand, Strasbourg is the capital of the Bas-Rhin "department" and the seat of the European Parliament. Its main tourist attractions are its beautiful Gothic cathedral and the picturesque Petite France area. The last time we were in Strasbourg, Katie was young and didn't remember much, so she wanted to see it again, and our brief stay gave us that opportunity.

Strasbourg's cathedral was built from the 12th to 16th centuries, giving it the distinction of combining both Romanesque and Gothic architecture. Its astronomical clock is one of the largest in the world at 18 meters. The cathedral is equally as beautiful lit up at night as it is during the day and we could have stared at it for hours!

We toured La Petite France on Le Petit Train. It's a 40-minute ride through the picturesque and historic part of the city at a cost of 7€.

One of the many things I love about Europe is the artistry in their chocolates and pastries. These chocolates caught my eye. We didn't buy them, but I'm sure they tasted as good as they looked!

Our hotel in Strasbourg was Le Bouclier d'Or and was perfect for us. It is located on the edge of La Petite France, an area of half timbered houses on the River Ill and an easy walk to the cathedral. The room was spacious and beautifully-furnished, and I was sorry we only had one night there.

It's hard to find the words to describe the beauty of this region. Magical comes to mind over and over. Tucked in the shadow of the Vosges mountains, the rolling vine-covered hills and enchanting villages are something out of a fairytale. In fact, the backdrop of the movie Beauty and the Beast was inspired by Eguisheim and Riquewihr! Three days was a perfect amount of time to explore this beautiful area.

After Strasbourg, we split our three days between north and south. Our home base was Riquewihr. I remembered visiting Riquewihr as a student living in eastern France many years ago and I was excited to return. It was a perfect base for us. In addition to Strasbourg, from north to south, the towns and villages we visited were Obernai, Dambach-la-Ville, Bergheim, Ribeauvillé, Riquewihr, Kayserberg, Colmar and Eguisheim.

We rented a car from the Strasbourg airport and drove the 45 minutes to Riquewihr on the four lane highway which parallels the Route des Vins. We were met at our apartment, settled in and spent the rest of the afternoon exploring Riquewihr.

Our beautiful home base for three days. It's roughly 2/3 of the way down the Route des Vins, so it's well-positioned to visit the entire area. It has one main street and several side streets of shops, wine tasting rooms and restaurants. During the day it was crowded with tourists, but in the evening most of the day trippers left and it felt as though we had it to ourselves. The main road leads on one end to the beautiful town hall, or Hotel de Ville, and on the other end to the ancient belfry built in the late 13th and early 14th centuries called the Dolder gate.

The village from the slopes above.

Our apartment, Cottage "The Jewel", was perfect for us. It was a one-bedroom second floor apartment with a fully-equipped kitchen and large bathroom. Situated on rue du Général de Gaulle, the main street of Riquewihr, we felt at home and enjoyed the beautiful views from our living room window.

There was a full moon our last night in Riquewihr. What a perfect ending to our time in this magical village.

We divided the remaining two days between north and south. On the first day we concentrated on the villages to the south; Colmar, Eguisheim, Kayserberg and Ribeauvillé.

Colmar is by far the largest of the four and while its old town is charming, we preferred the intimacy and charm of the smaller villages. The old part of Colmar is dubbed Little Venice due to the picturesque canal winding through town. Unfortunately we weren't able to take a boat ride on the canal due to timing. Colmar also has a lovely cathedral and a modern indoor market.

Eguisheim is a little jewel, and with Riquewihr, by far our favorite village. Charm oozes from each cobblestone path. Both villages in fact have the distinction of being on the list of Les Plus Beaux Villages de France (The Most Beautiful Villages of France).

What artistry on these doors!

Storks are populous in this part of the country. Notice the two nests in the photo below taken at the lovely little square in Eguisheim.

Both towns are charming and a bit bigger than Riquewihr and Eguisheim. The little Weiss River runs through Kayserberg and is one of the first sights you see when you arrive.

Notice the The Château de Saint-Ulrich, the castle which looks down upon Ribeauvillé in the photo below.

If I could have figured out how to bring one of these unique bird houses home from Ribeauvillé, I would have bought one!

Obernai has the feel of a bigger town while Bergheim is a tiny, but bustling village. Both were charming.

Honorable mention goes to Dambach-la-Ville, a small, beautiful and charming village which I believe doesn't get enough credit on sites which highlight Route des Vins villages. We arrived on a Sunday around Noon. It was sleepy but we found a restaurant where we had a delicious lunch. The column on the church grounds honors the children who were killed during both world wars.

This is the restaurant where we had lunch. It was a perfect day to eat outside and our meal was delicious. We did get a chuckle from the translation of a couple of options on the menu. Rest assured that we didn't have either stork product or our grandmother's pig cheeks!

Some photos from our travels between villages.

The icing on the cake were the stunningly beautiful rolling hills with their golden vines. 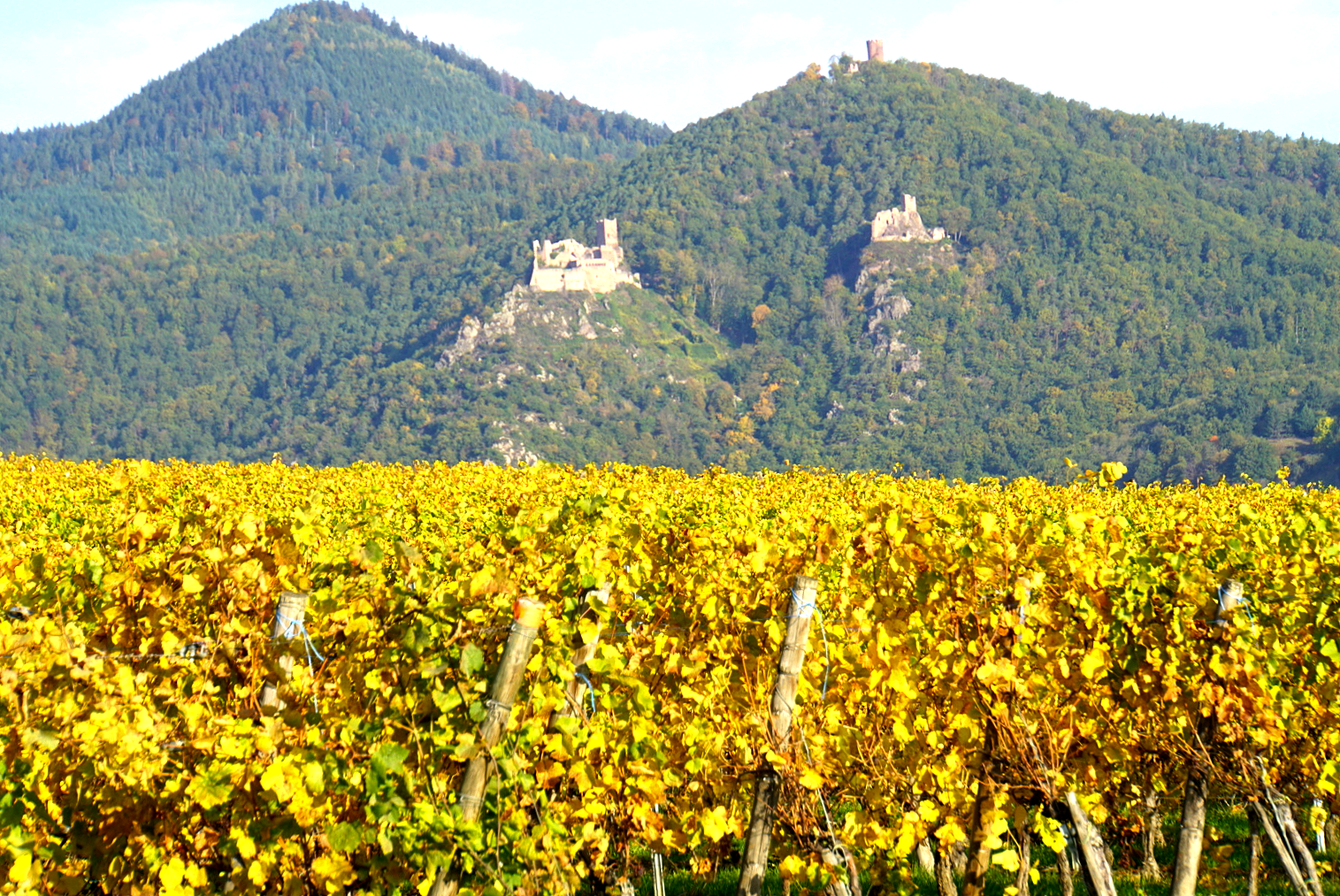 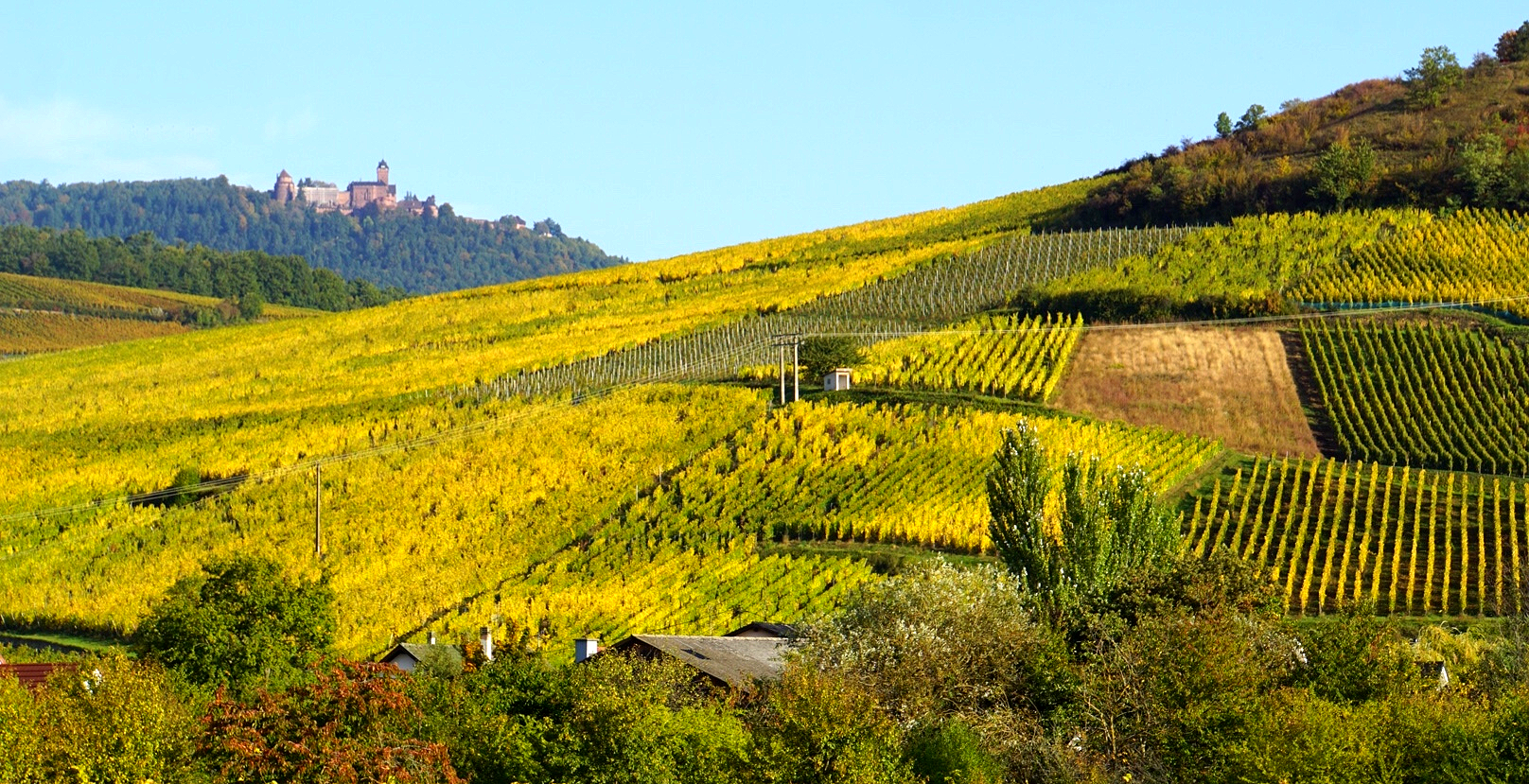 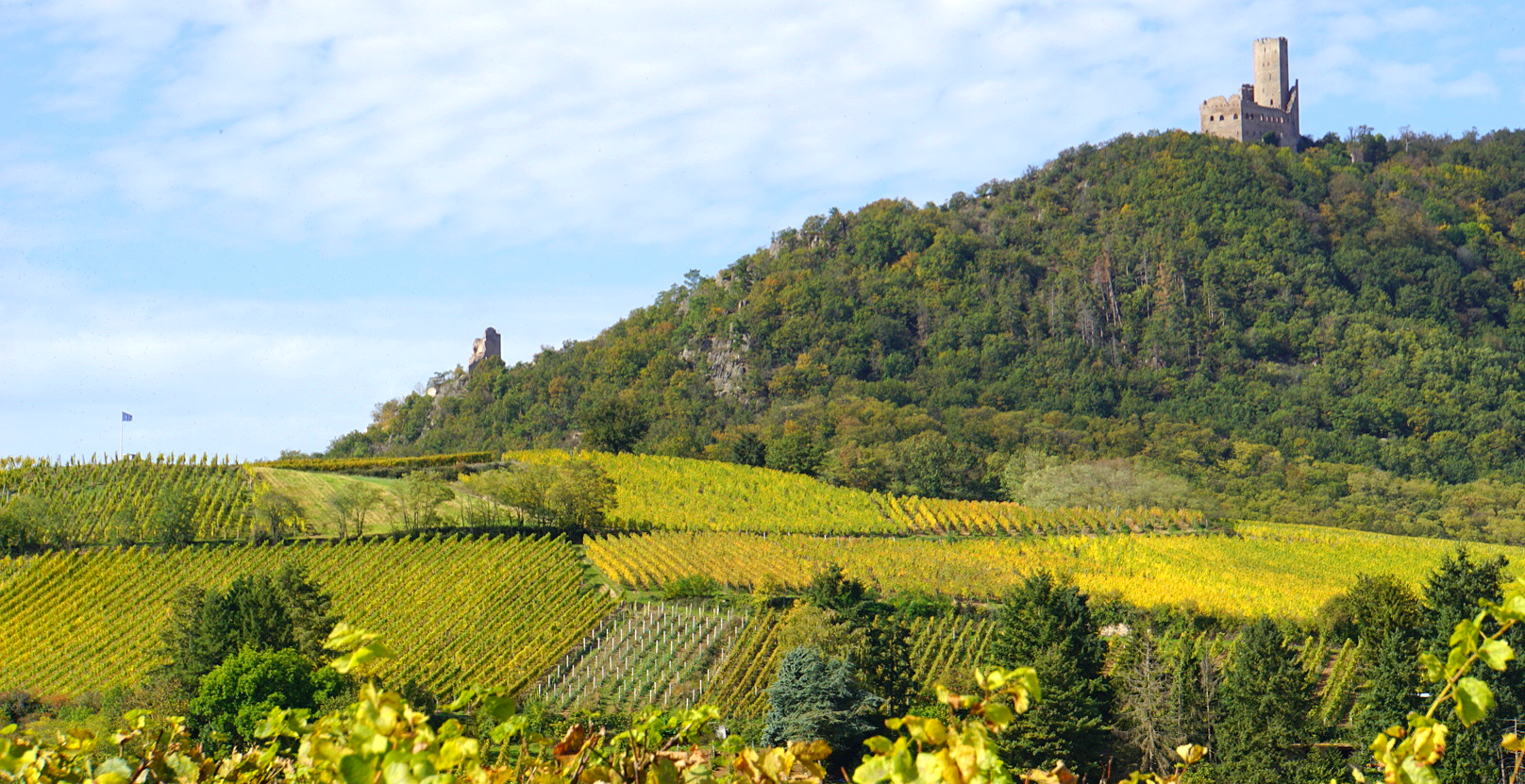 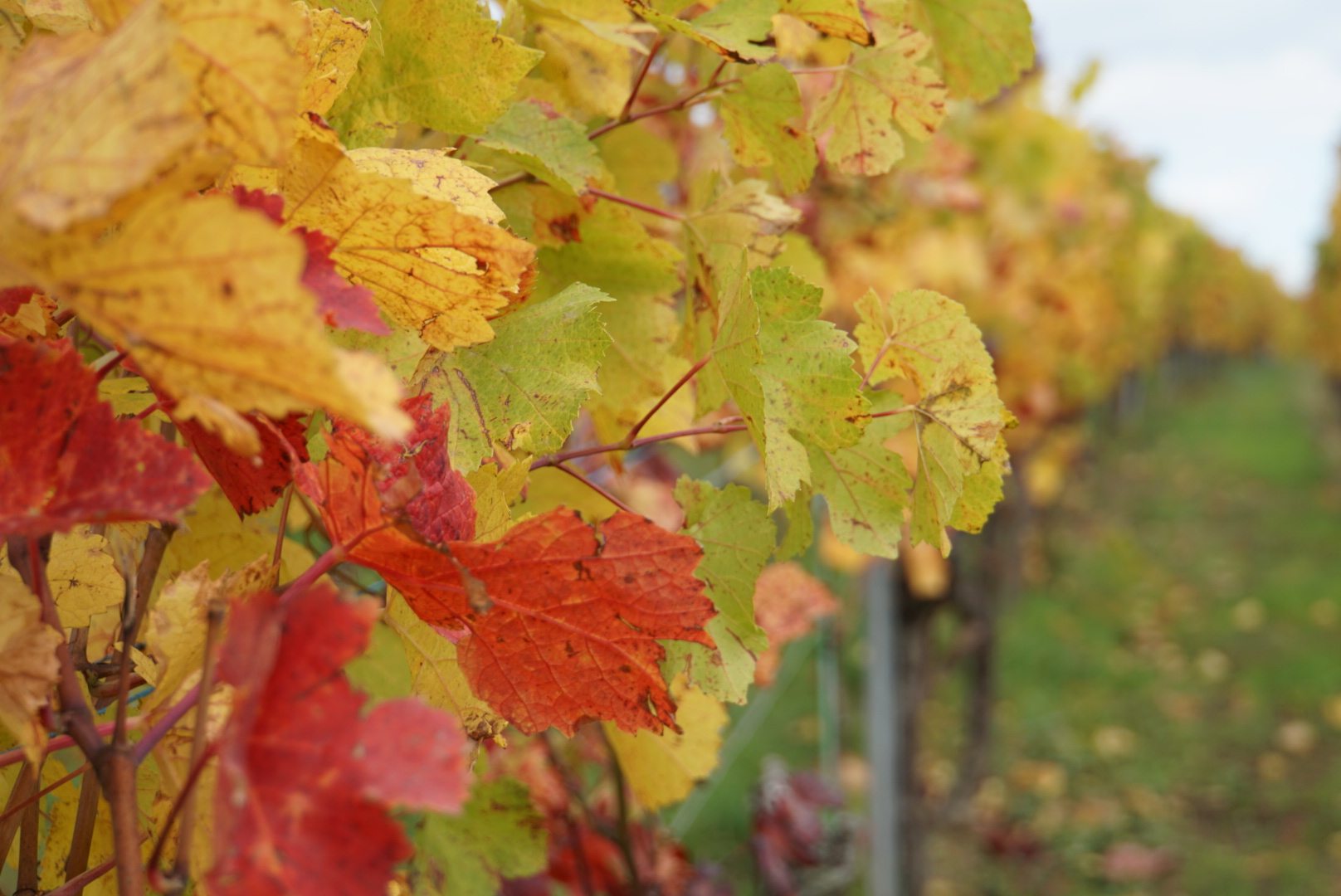 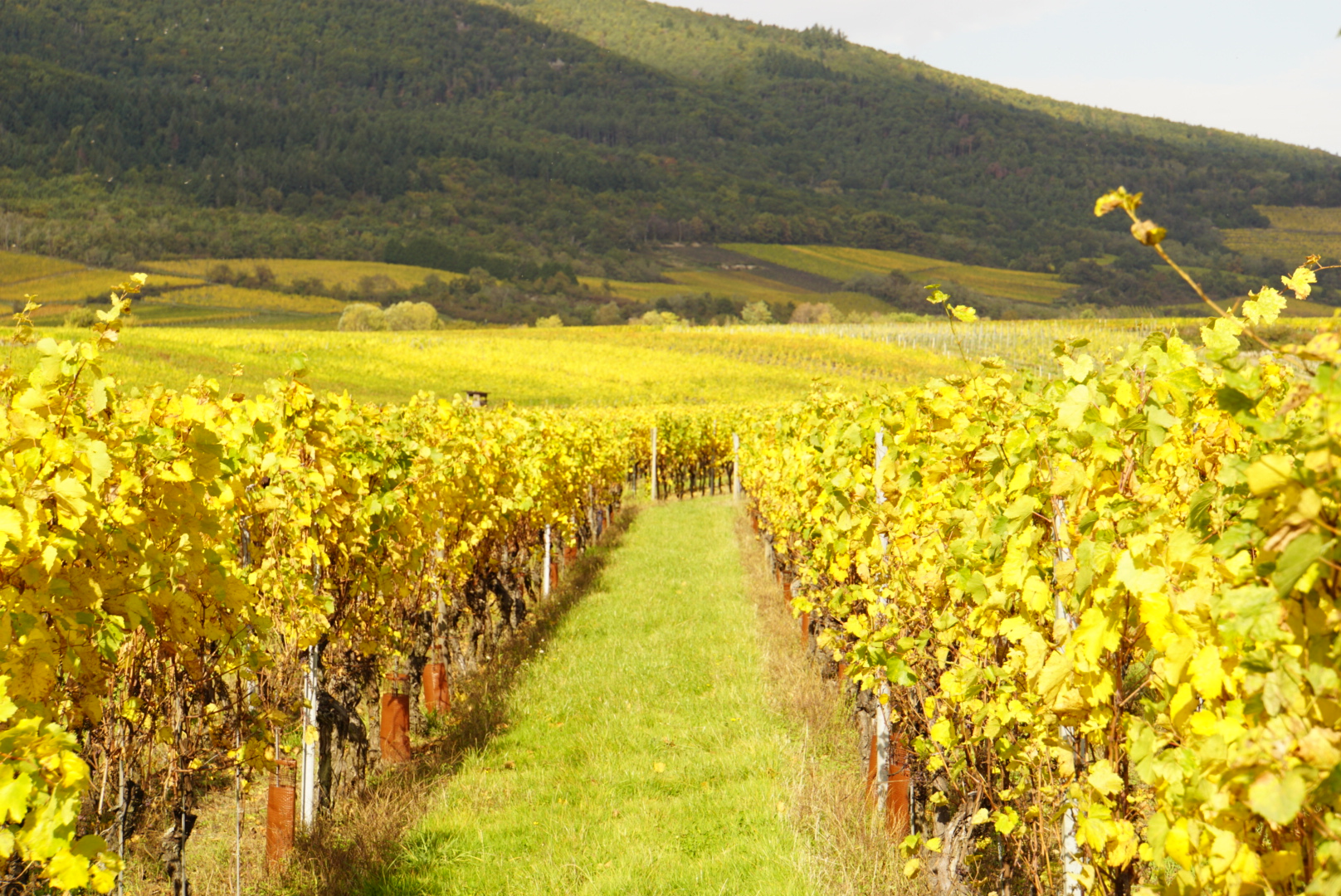 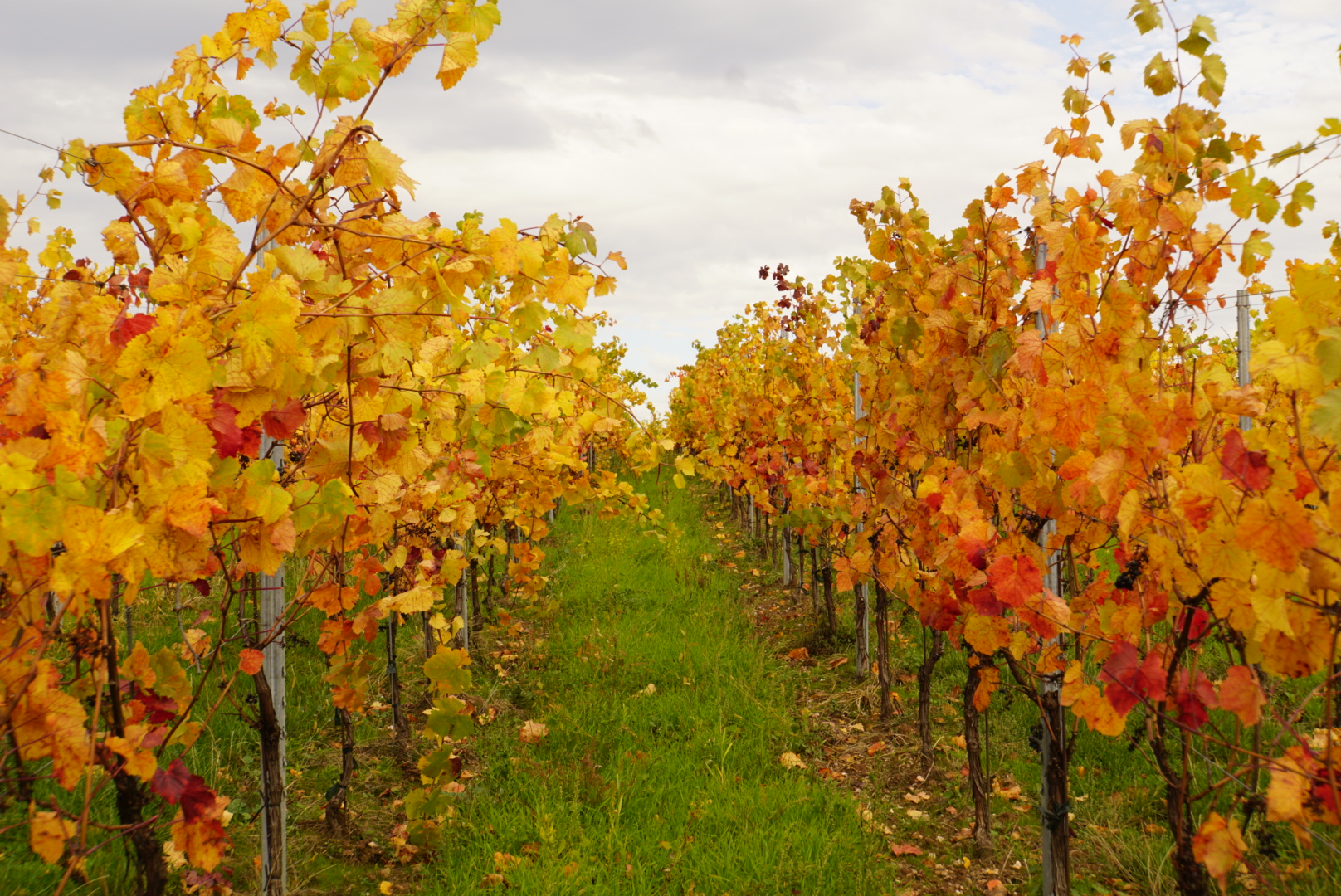 Notre Dame Then and Now: A Tribute

A Long Weekend in the City of Light